Dangling off the side of a 27 story building certainly gives you new perspective–and I’m not just talking about the amazing the bird’s eye view of the city.   I’m talking about a new perspective on life.  Going “Over the Edge” for Big Brothers Big Sisters may have scared me to death, but the experience did teach me some important life lessons that definitely outweighed the terror.

So here are the five things that I learned…and hope I never forget:

#1: We don’t dream big enough.* When I first signed up to go “Over the Edge”, I was nervous.  I wasn’t scared about the actual repelling (no, that fear came later!), what I really worried about was not raising enough money.  (By volunteering for this event, I committed to raise at least $1,000.)  As someone who had never tried fund raising before, I wasn’t sure how to even get started–and I think it goes without saying that $1,000 isn’t exactly chump-change.  This was a big challenge, and to be honest, it scared me.  I doubted myself.  What if I didn’t raise enough?  What if…(gasp) I failed?  In fact, these thoughts almost held me back from a once in a lifetime experience.

Last year, I had a crazy dream of running a marathon.  I was never a great runner; it seemed like an impossible goal.  But I worked hard…and I did it.  After repelling 27 stories, I was just as proud to earn this medal as I was when my feet crossed the finish line.

And I think this happens a lot–we let fear take over and get in the way of our greatness.  There’s a quote I love: if your dreams don’t scare you, they’re not big enough.  Amen!  Being afraid is normal–we should be afraid…we just shouldn’t let that fear hold us back.

I had this same revelation when I completed my first marathon. It’s true: you’ll be amazed at all the things you can accomplish…if you’re crazy enough to believe that you can.

And that’s exactly what happened.  The goal that once seemed impossible, quickly became a reality.  Not only did I meet my $1,000 goal, I more than doubled it.  I ended up raising over $2,600 and was the 4th top raiser for the event overall.  I never dreamed I’d be able to raise that much.

So here’s my question to you: What could you accomplish if you decided to let go of the fear and just try?  (And even if you do fail, so what?!  At least you tried–and that’s way better than doing nothing!)

#2: *Big dreams don’t come for free–they take a lot of work.  So this is my only caveat to my lesson #1, my “*” that I think is important to emphasize.  Dreaming big is important, but it’s just the first step.  Step two is being ready to work really, really hard.  I knew that raising this money was going to be a stretch–so I needed to get creative.  I organized fund raising events.  I met with restaurants that would make a donation to my charity.  I spent hours handing out flyers.  I wrote blog posts pleading my case and explaining why I believed in this cause.  I met with local stores, asking if they would partner with me.

I heard something that stuck with me: do you know what separates truly successful people from others?  It’s not talent.  It’s not intelligence.  It’s not money.  It’s imagination.  I can definitely attest to this fact–a little imagination went a long way to helping me reach my goal.

#3: Kindness bonds people together. Fund raising was an incredibly humbling experience for me.  I knew I’d get donations from some of my closest friends and family members. (No shock that my first donation came from my mom–I love you, Mom!) 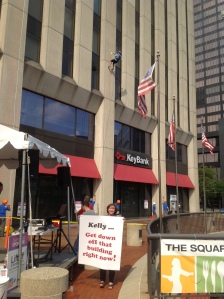 But what was so cool was was the huge support I received from friends, co-workers, neighbors–some who I haven’t talked to in years.  In fact, one person was a friend of my sister who I had never even met!  People who I knew were struggling financially, still sent money wanting to help.

At times it seems like we’re surrounded by bad news–crime, violence, greed.  But I believe that there is so much more good in the world. Kindness, love, and generosity bond us together–they’re a common denominator that has the power to connect us.

#4. Sometimes, all you need to do is ask.  I truly believe that most people want to help…it’s just sometimes they don’t know how.

I realized one of the best ways to help Big Brothers Big Sisters was not to work alone, but to find other crazy people to repel with me!  A few names immediately came to my mind.  While most of them weren’t able to join me, one said yes….actually, “Hell yes!” to be exact.  John R, one of the VPs at my company, was thrilled when I mentioned the opportunity to go “Over the Edge” and he raised $2,500!

I love that…just by asking a simple question, I not only found a partner in crime for the event, but Big Brothers Big Sisters found another advocate.

#5: You don’t have to repel down a building, to make a difference.  So here’s the thing…going “Over the Edge” was nothing short of awesome–after all, it’s not everyday when you can feel like Spider-man and have a crowd of people cheering for you.  But for me, I wasn’t joking when I said that it was a “once in a lifetime experience”!

That being said, I’m determined to continue supporting Big Brothers Big Sisters–I just want to do it with both of my feet on the ground!  So far I’ve joined their marketing committee and am also organizing a company Christmas program to support nearly 30 “littles” in my hometown.  Again…a little imagination goes a long way.

(Fun side note: John R. has actually already signed up to go “Over the Edge” again next year–and is actively recruiting others to join him.  Kindness–it’s contagious!)

And in closing,  I want to take this opportunity to once again thank those who made a donation to Big Brothers Big Sisters on my behalf and supported my big, crazy dream with this little adventure.  I was overwhelmed by YOUR kindness, although not at all surprised by it.  This experience just reminded me something that I’ve always known–that I am absolutely blessed by having amazing people in my life.  So, these two words are said with the most sincerity and love: THANK YOU to my mom, my father-in-law, Stacy R, Diane M, Ellen M, Allison A, Sarah S, Angel P, Shirley A, Holly & Darren P, Donna K, Laura M, Melissa B, Tamara S, Rebecca C, Connie F, Kim O, Deb C, Dale M, Matt J, Margo M, Michelle F, and Rhonda D.